Attitudes of American Soldiers During WWII

National Endowment for the Humanities

During World War II, the U.S. Army conducted surveys to reveal attitudes toward, and between Black and White Soldiers. These responses hold insights regarding attitudes about race, gender, and family roles of the time. Our research team used computational text analysis and social network analysis of handwritten responses to learn about the dynamics and language of soldiers in the 1940’s.

The National Endowment for the Humanities funded this project as part of a larger American Soldier in World War II initiative. Its intent is to make available to scholars and the public a remarkable collection of written reflections on war and military service by American Soldiers who served during the Second World War.

To analyze U.S. Soldier attitudes, we employed various strategies from computational text analysis and social network analysis to examine what is called “Survey 32.” This was a brief survey conducted during World War II to understand whether or not Soldiers preferred separated or integrated units and the ability for soldiers to provide a written explanation elaborating on their responses to the survey as well as their views on the survey as a whole.

After an initial phase of data wrangling, parsing and cleaning, we conducted exploratory data analysis to find out more about the backgrounds of the Soldiers who completed the survey. Our team also did a sentiment analysis to gain a better understanding of what emotionally-charged words Soldiers used to weigh-in on racial and gender relations.

To further round out our understanding, topic modeling captured prominent themes that emerged from survey responses. 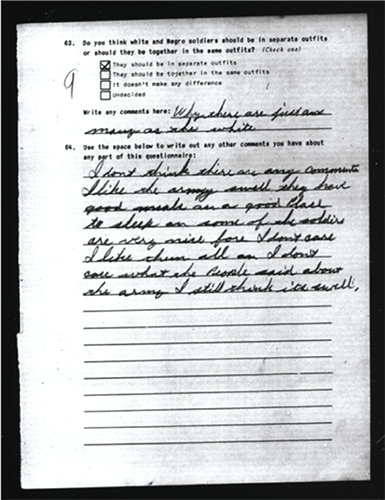 Understanding general themes of attitudes from both Black and White Soldiers in longer responses were revealed by topic modeling to identify groups of related words. The size of the nodes in Figure 7 correspond to the degree that words are connected and illustrate what was on the minds of each group.

While women were unable to serve in the military in the same capacity as men during WWII, they did contribute to the war effort through the Women's Army Corps (WAC). Both Black and White Soldiers surveyed did not have a positive view of women in the U.S. Army.

Figure 3. Black soldiers surveyed were not as educated compared to White Soldiers. Most White Soldiers had at least some high school education.

Figure 5. Words used uniquely by each group supported the creation of this sentiment plot illustrating that the unique words of Black Soldiers corresponded more with more fear, disgust, anger, and sadness than those of White soldiers. The words used to evaluate these sentiments were unique to each surveyed group, and the words used by Black Soldiers were never used by White Soldiers and vice versa.

Figure 6. Word clouds visualize the top 20 frequently used unique words of Black and White Soldiers, on the left and right respectively. The size of the word is proportional to the number of times it appears in the text. Perhaps, the most important takeaway from this analysis is that the words slavery, lynch, or jail never appeared in the response of a White Soldier. White Soldiers’ unique words were significantly more lighthearted as they discussed things such as music and pets.

Figure 8. Black and White Soldiers surveyed did not have a positive view of women in the U.S. Army.